Resilient recently released another batch of single barrel bottlings sporting a new label design and a couple of other substantial changes. Their first batch of single barrels was sourced from MGP, aged 10 years, and released late 2016. The second offering we sampled came from Tennessee, clocked in at 14-years-old and was bottled at the same 107 proof. (You can read our impressions of those previous bottles below.) The third time around this juice has again been distilled and aged in Tennessee, bottled in Kentucky. Though we now have a 15-year age statement bottled at their familiar 107 proof, a 14-year bottled at a barrel proof 104, and a 14-year bottled at a barrel proof 123.2! There are other barrels available, I was sent these three for tasting. 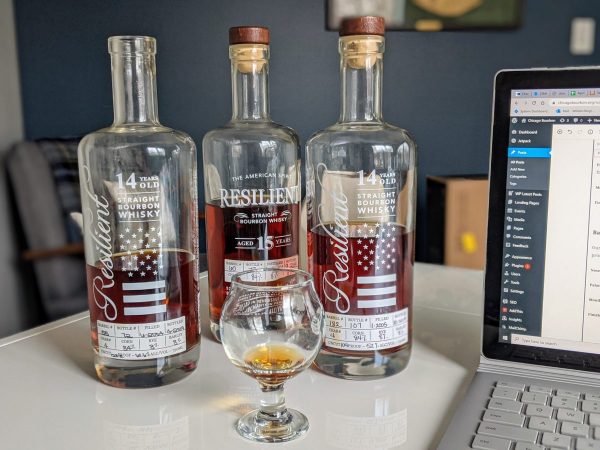 Barrel # 60 begins with the same mashbill as the previous 2018 bottlings, 84/8/8, which is consistent across the three single barrels I received. With a new 15-year age statement this bottle comes in at 107 proof packaged in Resilient’s traditional label design complete with all of the relevant statistics Resilient is known for including.

Nose: Spicy, deep caramel nose with hints of honey and dark fruit. A certain sharpness on the nose that I assume comes from its long time in the barrel.

Palate: Spicy and warm but also kind of mellow. Caramel and vanilla show through with a nice balance of toasted wood.

Mouthfeel: A great heavy mouthfeel, not thick but definitely substantial.

Resilient did something a little different with these next two bottlings. A new label design accompanies this uncut 14-year Straight Bourbon Whisky bottled at 104 proof.

Nose: A familiar nose wafts up from the glass. Sweet caramel, baking spices including cinnamon and allspice.

Palate: Much lighter than barrel # 60 on the first sip, floral notes evolve into sweet fresh fruit with a kick of mild spiciness.

Finish: The sweetness on the palate finishes with a medium length soft spice.

Our third sample is also a 14-year Straight Bourbon though this barrel came in at 123.2 proof and, being uncut, the bottle carries the same proof.

Palate: Bursting with layers of black pepper, Luxardo cherries, and dashes of cinnamon/sugar toast. This bourbon packs a punch though it is well balanced if slightly hot. That’s the nice thing with barrel proof bottles, you can cut it yourself with a bit of water to find your own sweet spot.

Finish: Like the Energizer bunny. A spicy heat lingers with a tingle on the tip of the tongue.

Final impressions:  The value of Resilient’s single barrel, high proof, age stated bottlings continues with this latest round. With these bottles returns the much loved 107 proof as well as some bottles of older juice, some at slightly lower proof, and some at significantly higher proof. I’ve always found a nice variance that makes each bottle in previous tastings unique but if there were ever a time to try more than one Resilient single barrel bottling now is it! As noted above, barrels 60 and 182 are killer bourbons with a nice balance of sweet and heat. Barrel 55, bottled at 123.2, is spicy and bold. As I found in a recent tasting we hosted, barrel 55 doesn’t ask for your taste buds’ attention, it commands it.

The Story At first glance, I thought this might turn out to be a “novelty” whisky. It has a story to go […]

The Story: According to their website, American Fifth Spirits launched in 2013 in Lansing, Michigan, with their tasting room opening in 2015. […]