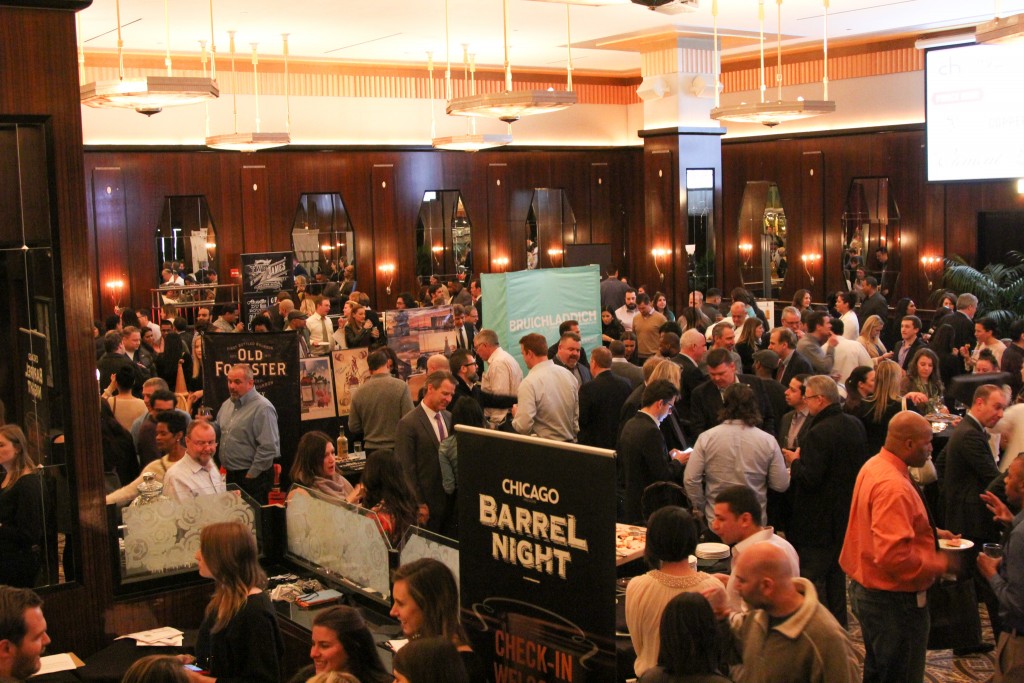 On February 25th 2016, Chicago Magazine hosted their first Barrel Night event – “A celebration of whiskey and fine spirits.” The event was held at the beautiful Montgomery Club. Our last event at the Montgomery Club was a Great Gatsby Casino Night, with proceeds benefitting Gilda’s Club. Another event appropriate to the classic decor of dark wood paneling, mosaic tile floors, and 20’s style light fixtures overhead. A nice venue for any event; especially one geared towards whiskey, bourbon, and scotch enthusiasts. With the continued growth in popularity of whiskey and bourbon in the US this event comes at just the right time.

While the evening was busy and seemed to fly by, we did take the opportunity to catch up with a handful of the bourbon and whiskey reps and proprietors. Several of the big names were in attendance, Bulleit (Stitzel-Weller / Diageo), Crown Royal (Diageo), Woodford Reserve (Brown-Forman), and Jack Daniels (Brown-Forman) to name a few. There were also familiar faces including WhistlePig and CH Distillery. Then there were some we had yet to meet that we took some extra time to speak with. Journeyman, Two James, and Copper Fiddle are all midwest whiskey and bourbon producers we met for the first time at Chicago Magazine’s Barrel Night. 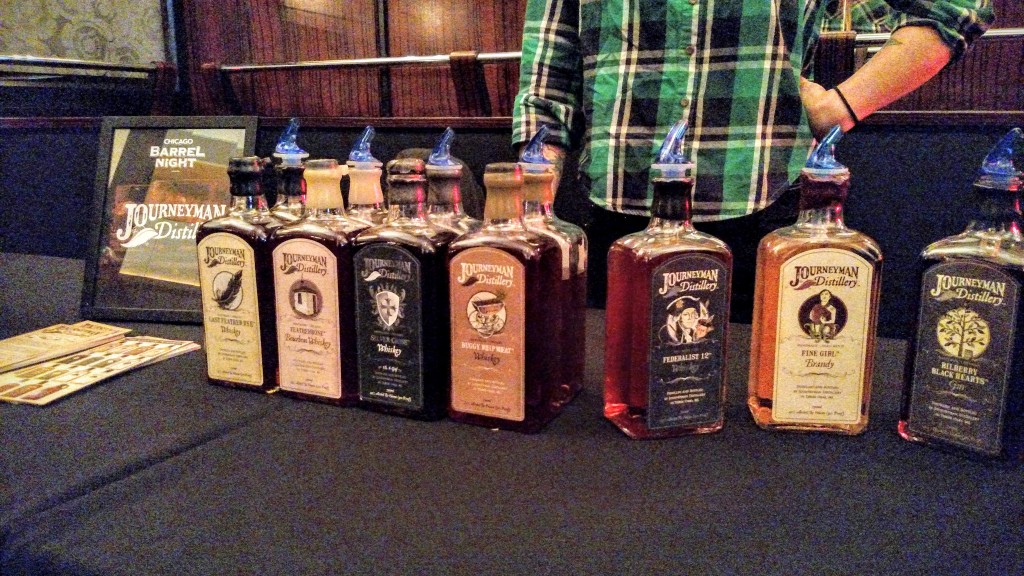 Though we hadn’t met Journeyman before this event we had heard a lot about them. (We’ll be covering a detailed distillery tour this spring.) Journeyman has a sizeable portfolio including quite a few whiskeys, bourbon, vodka, gin, rum, brandy, and other specialty spirits. We tasted their whiskeys and bourbon both of which are a welcome addition to the midwest craft spirits scene. I mentioned we had heard about Journeyman before. They are one of the Kings in the “Four Kings” whiskey released in collaboration with FEW Spirits, Corsair Distillery, and Mississippi River Distilling. Four Kings is a very cool story you can read more about in our blog post about Evanston’s FEW Spirits: here. 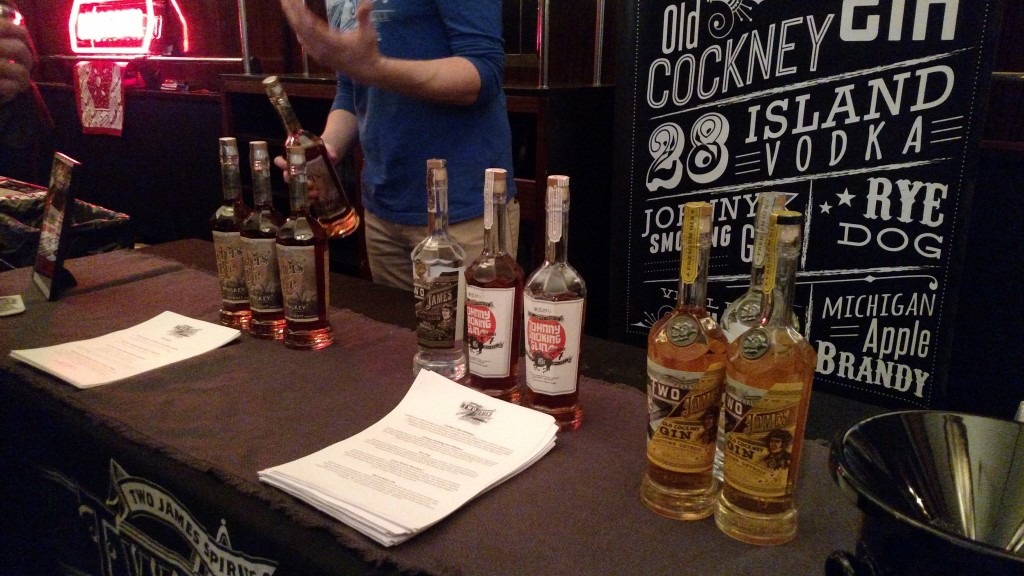 Our first experience with Two James was back in December when we were introduced to their ‘Grass Widow Bourbon’. A high rye expression finished in Madeira barrels. Two James tells us the Grass Widow is being discontinued so we tried a few of their other whiskeys this time. The ‘Catcher’s Rye’ and the ‘Johnny Smoking Gun’. The rye is 100% rye, aged 2 years in full size 53 gallon barrels. Their marketing statement for the rye makes a great point. “Catcher’s Rye proves there is no substitute for time or proportion”. Some of the newer producers use smaller barrels and age for shorter periods in an effort to bring a product to market quickly. While this sometimes works, we’ve tasted a few excellent examples of this method recently. It often produces a whiskey with either a strong ethanol nose/finish or a “young oakiness”. Either way it’s easier to pick out the small barrel / young expressions when put up against the deep, complex, smooth profiles of whiskeys that have gone through the extra ‘time and proportions’. The Smoking Gun is stated to be “crafted specifically to compliment the “umami” of the rich pork and fish broths of Japanese cuisine”. This is also a high rye, 70% corn and 30% rye, with a rich smoky finish reminiscent of a scotch. We didn’t have any Japanese food handy to pair with this whiskey but hopefully we’ll see it at our favorite ramen shops soon. 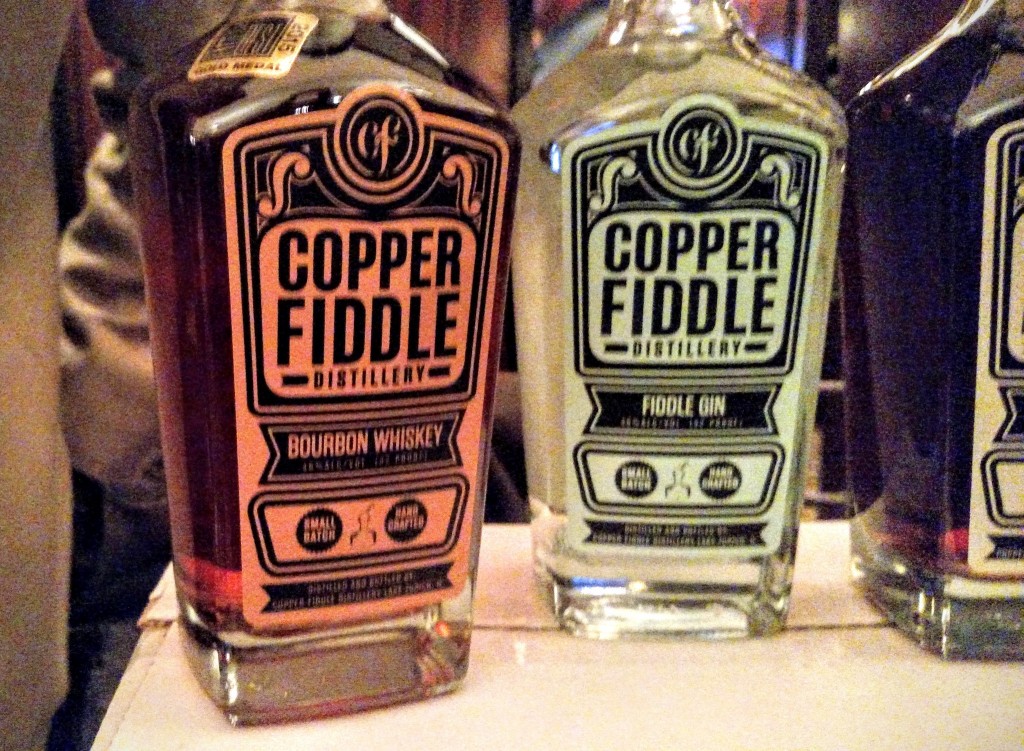 Copper Fiddle is another newcomer on the whiskey scene, established in 2013. We sampled their bourbon at the full 92 proof. At a young 18 month age this bourbon was damn tasty, we sampled twice to be sure. It holds up well against bourbons two to three times its age. In spirit, it reminds me of Old Weller Antique in that when tasted blindly you might swear it’s older. There’s a pleasant complexity to its palate that we couldn’t put our finger on at the time. This is another distillery we will be visiting this spring. We’ll be sure to get more details then and follow up here with an exclusive post. The Copper Fiddle Bourbon will likely be available at Binny’s soon. 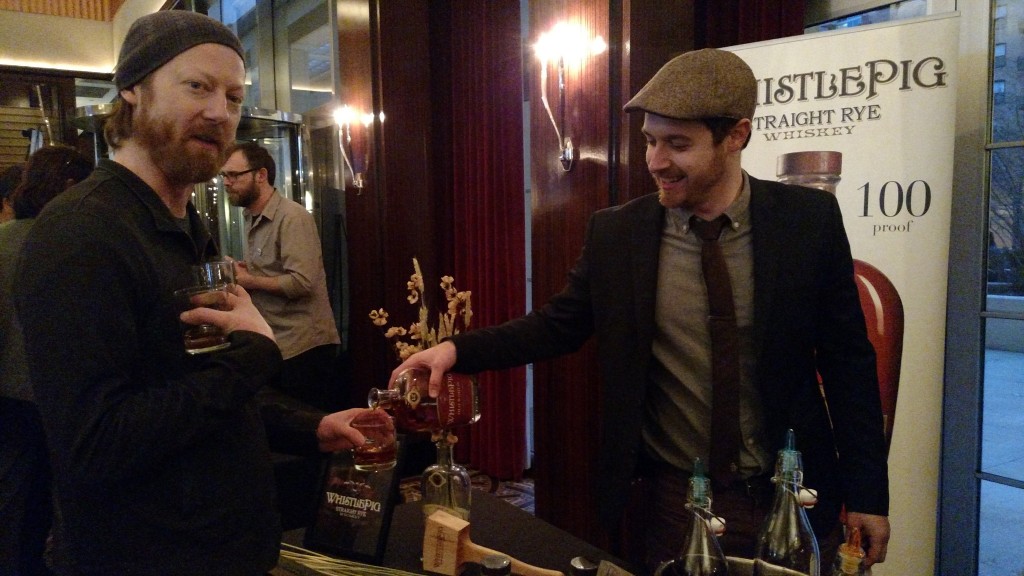 WhistlePig makes a few different rye whiskeys. They currently source the rye from Canada and finish the aging process at their farm in Vermont. They do now have a grain farm and distillery on site in Vermont and will be producing their very own grown, distilled, and aged whiskeys. In the meantime, Canada produces excellent rye. Solidified by Jim Murray’s  “World Whiskey of the Year” awarded to Crown Royal Northern Harvest Rye.

On this occasion we sampled both the 10 and 12 year WhistlePig Rye. The 10 year is impressive as always. The 12 really takes it to a new level of complexity and is a true pleasure to sip neat. This leads us to the highly anticipated WhistlePig 15 year which will be released later this month. Subscribe to the Chicago Bourbon blog and follow us on social media to see our coverage of the Chicago launch event on March 14th. At the beginning of Chicago’s Whiskey Week leading up to WhiskyFest on March 18th, 2016. We’ll be among the first to sample the 15 year before it’s available to the public. (We will also be covering Chicago’s WhiskyFest 2016) 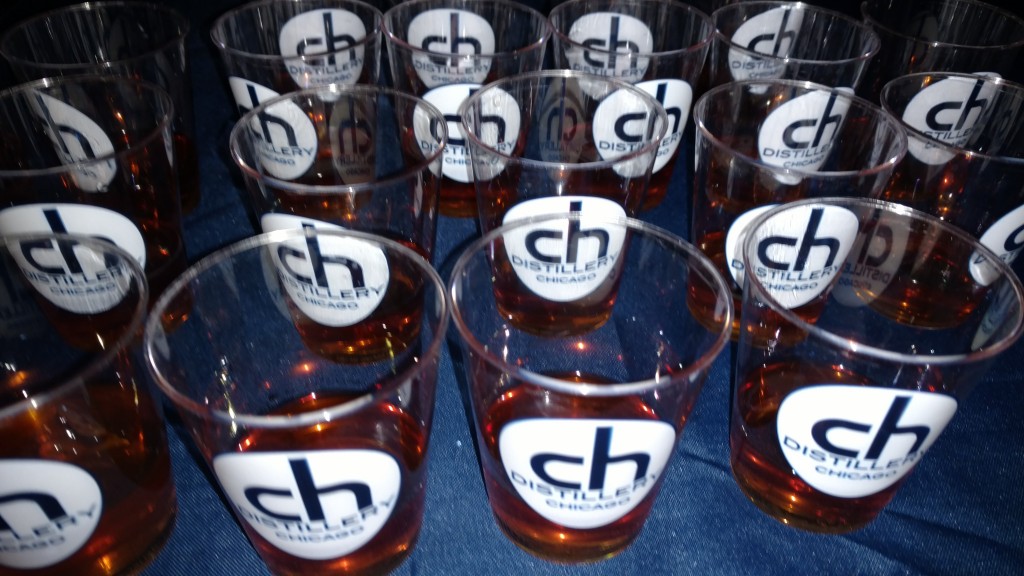 From all the way over on Randolph Street came CH Distillery to share many of their spirits. We sampled their staple vodka, gin, and aquavit. They also had a couple newcomers to their line, the CH Peppercorn and a CH Coffee liqueur. We didn’t have the chance to sample those however we did taste their unique take on a Manhattan. Made with their own barrel aged rum. It tasted great and is yet another example of what their mixologists create and serve at their bar. With rum poised for a resurgence in the US market now is a great time for CH and others to experiment and help usher it in with a bang.

We’ve covered the fine whiskey offered at this event but what else did Barrel Night have to offer? There were two classes hosted by whiskey brand ambassadors, “Tennessee Whiskey 101” and “Kentucky Bourbon Basics”. Both were half hour introductions to the spirits aimed at familiarizing whiskey and bourbon fans with their represented brands while leaning a little bit about the history and process along the way. Also offered throughout the evening were straight razor shaves by State Street Barbers and a little cigar rolling 101 by CF Dominicana Cigars. Other companies represented were Chicago’s Trunk Club, now part of Nordstroms. And ESQ Clothing, offering custom men’s clothing and accessories. 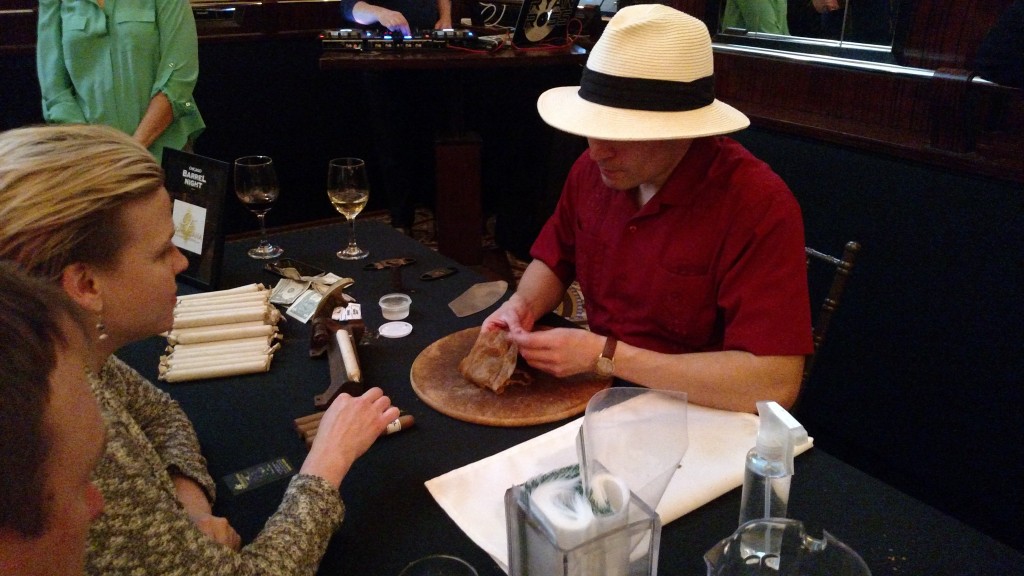 In total there were 17 brands represented:

This was a fantastic evening and we look forward to future events hosted by Chicago Magazine! 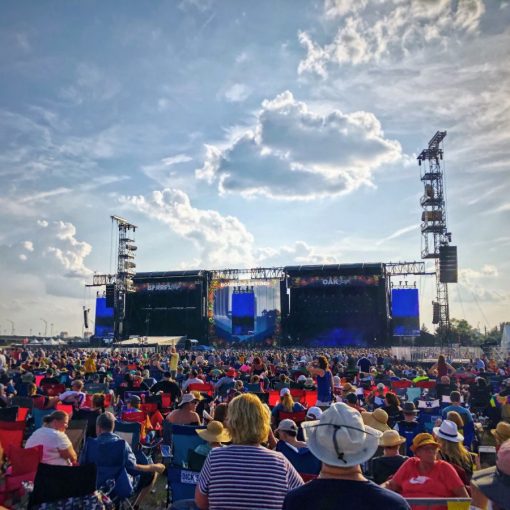 Bourbon & Beyond, billed as ‘The World’s Largest Bourbon Festival’, wrapped up last week after bringing together 91,000 fans to enjoy nearly […] 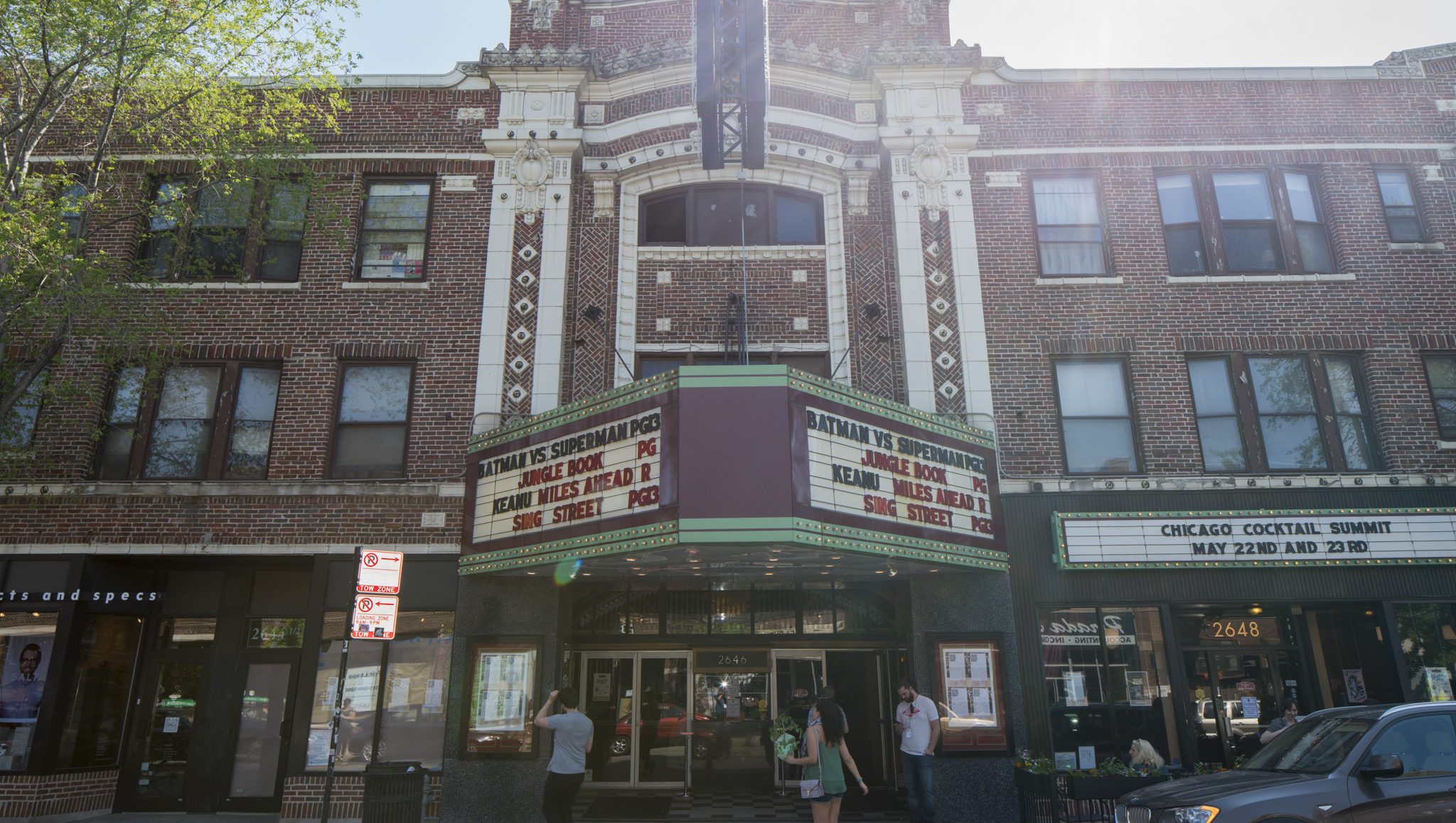 This spring we had a Chicago first. A gathering of cocktail enthusiasts, bartenders, and industry insiders known as the Chicago Cocktail Summit. […]